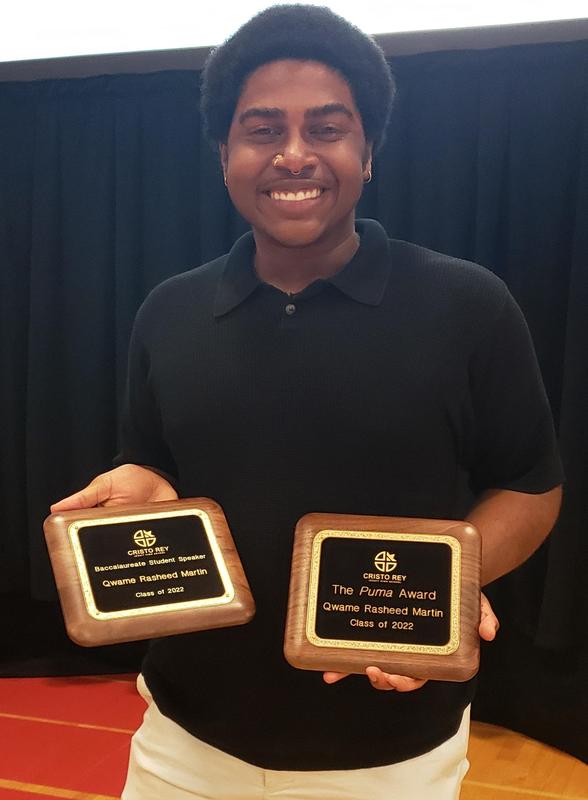 Recent Puma Award Recipient and Baccalaureate Speaker for the Class of 2022, Qwame Martin, shares his story on what was the best thing to happen to him this school year. Read his heart-warming realization into what he wants to continue doing even after high school.
From hugs to college admissions, Minnesota students reflect on best things that happened this year. It's been another topsy-turvy year for kids, but the positive memories shine through.
By Eder Campuzano (https://www.startribune.com/eder-campuzano/8801001/) Star Tribune
JUNE 11, 2022 — 3:34PM
Minnesota's students have navigated particularly turbulent waters in school and in life over the last year. They've worked through abrupt pivots to distance learning (https://www.startribune.com/minneapolis-schools-virtual-2-weeks-jan-18-through-jan28/600135236/) as the winter pandemic wave left schools short-staffed. And they've
pushed through a sometimes rocky return to the classroom, with concerns about their mental health on the rise (https://www.startribune.com/student-mental-health-supportis-sticking-point-in-minneapolis-st-paul-teacher-negotiations/600153602/).
Many have taken to the streets to demonstrate against racism in the ongoing reckoning after George Floyd's murder and gun violence as shooting after shooting (https://www.startribune.com/deshaun-hill-minneapolis-north-high-student-mournedwas-beyond-a-leader/600149512/) claimed young lives (https://www.startribune.com/police-atf-on-scene-of-shooting-outside-richfieldschool/600141917/) in the Twin Cities and beyond (https://www.startribune.com/minnesota-teachers-give-students-time-space-to-processtexas-tragedy/600176980/).
Yet students have found so many moments worth celebrating, too, since classes started in September. From their accomplishments in the classroom to newfound friendships to personal milestones they hold dear.
Sometimes, it's as simple as a hug, a treasured bicycle, a reignited love of language. As students look toward summer, here are some of the best things that happened this school year, according to a few of them.
A hug-filled return
Sheng Vang still remembers that first hug she got from a friend after stepping off the bus in early September. The Cooper High School junior hadn't set foot on the New Hope campus in 18 months.
Vang, 16, spent her entire sophomore year learning virtually. While she understood her parents' hesitation to send her back to Cooper during the pandemic's worst stages, Vang missed being in the classroom, particularly during electives.
"Doing painting online was not exactly ideal," Vang said.
Her sophomore year was blurred by repetition. Vang would wake up 15 minutes before her first class, log on and log off at the same time each day.
But this year's routines brought a sense of freshness, from the new construction she observed during bus rides to school to the class schedule that changed with the seasons.
Vang had to wake up a little earlier. But when she boarded the bus at the end of each school day, she knew the next day wouldn't play out exactly the same way.
"You never know what's going to happen tomorrow," Vang said.
A dream on deferred decision
Talha Rao braced himself for disappointing news. His aging Toshiba laptop was struggling to refresh the Stanford University website, and the Blaine High senior was certain it was a bad omen.
Rao, 18, landed on the page after the California university e-mailed him with an update on his admission status. He had already been placed on the university's deferred decision list.
"They probably don't want me," he remembers thinking.
Then the red confetti animation burst across the screen. Rao had gotten into his dream school, a blazingly bright spot in a year full of strife.
Rao had been displaced from his home earlier in the school year and was staying with a friend for much of the rest. The two young men decided to open their admissions e-mails together, both of them anticipating rejection.
Now, Rao and his friend are looking to the future and the prospect of working toward one of his passions. The Pakistani American teen has long dreamed of touring south Asia and helping people connect with social services and find medical care.
Rao isn't sure what he wants to major in but is leaning toward human biology. He's also considering a minor in human rights.
"I want to help people. For free," Rao said.
Catching air again
Kanandi Mack loves to ride.
Whether it's a skateboard or a mountain bike, the 11-year-old feels most at home with wheels beneath him. But soon after COVID-19 hit, his bike broke down.
That kept Mack, who lives in Minneapolis and is homeschooled, off the state and city park trails he explored to keep himself active during his fifth-grade year. A new bike wasn't in the family budget, at least not one that could handle the punishment Mack could mete out, so he defaulted to his skateboard for all of 2021.
Then Mack's father surprised him with a brand-new mountain bike. And for the first time in two years, he got to catch big air on the dirt trails he loved exploring.
As if that weren't enough, a local nonprofit also rewarded Mack with a new bicycle as a thanks for his volunteer efforts. He alternates between his two new rides, but if he's being honest he prefers the nonprofit's gift. (It's better suited for jumps.)
Mack also picked up a few new tricks, one of which earned him a new nickname from his mother, Ayolanda.
"She calls me the wheelie guy," Mack said.
Finding the freedom to write
Qwame Martin loves writing — or at least he does now.
For the last few years, the senior at Cristo Rey Jesuit High in Minneapolis strung words together for essays and to dissect current events for his classes. In the aftermath of George Floyd's murder, he had an essay published on what it means to be Black in America (https://threesixty.stthomas.edu/youth-voice-a-journal-of-being-black-in-america/).
Martin, 17, is proud of all that work. But much of it felt rigid, a little too structured for
his liking.
"I took AP English this year, which is pretty technical. My teacher told me writing doesn't have to be all about books and current events that are strictly governmental," Martin said. "It can be narratives, poems or a short story. It can be anything, as long as you feel confident in it."

Soon after that conversation, Martin bought a brown leather notebook.
He scribbles his thoughts and outlines short stories on the back pages. The front is reserved for his finished work, just in case one of his friends decides to skim through.
"Hopefully, they get tired before they get to the back," Martin said with a laugh.
He's set to start at Concordia College in Moorhead, Minn., this fall. Between now and then, Martin is working at LearningWorks at the Blake School in Minneapolis, teaching English.
"I know writing makes me happy," he said.
Eder Campuzano covers statewide education for the Star Tribune.
[email protected] 612-673-4722 edercampuzano
https://www.startribune.com/from-hugs-to-college-admissions-minnesota-students-reflect-on-best-things-that-happened-this-year/600181287/?utm_source=newsletter&utm_medium=email&utm_campaign=amnews Source: Eder Campuzano, Star Tribune