Cristo Rey Graduate Making an Impact at the University of St. Thomas 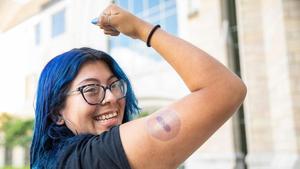 Adali Flores-Mendoza ’19 is a Dease Scholarship recipient at the University of St. Thomas. She was class President during her time at Cristo Rey and is now making an impact at St. Thomas as a triple major. She was recently selected to debut one of St. Thomas’s first ever Spanish-language campaign video on Univision.
March 14, 2022
When Adalí Flores-Mendoza ’23 was attending Cristo Rey Jesuit High School in her birth city of Minneapolis, she thought she’d attend a large college in a big city like Chicago, Los Angeles or New York. But when she started looking closely at schools best suited for her as a first-generation Mexican American, she decided to also apply to the University of St. Thomas in St. Paul – a campus that led her to exclaim “que lindo” – “how beautiful.” Her mother told her that “Tommies get jobs,” and that resonated with Flores-Mendoza, who has many career dreams, including starting as a social media manager, spending time as an English teacher in Japan or South Korea, and one day to rise to editor-in-chief of a major magazine. So, she pursued St. Thomas. “When it was time to look at financial aid packages, I had about a $10,000 gap,” she said about what she could actually afford. “I knew I wanted the college experience to live on campus and go debt-free. Coming from a family of immigrants, the second in my family [behind a brother] to go to college – I knew it would be up to me, so I worked hard.” As president of her high school class with 300 hours of volunteer service – well above the 40 hours required for graduation – her stellar academic performance and strong leadership in her community, as well as an outstanding essay, led to St. Thomas awarding her entry into the competitive Dease Scholarship Program, which comes with a full-tuition scholarship. A St. Thomas admissions counselor surprised her with the news at high school that day by handing her an envelope to open. When Flores-Mendoza read the insert, it said, “Congratulations.” “I remember thinking ‘I can’t believe it,’” she said. “I looked up and said, ‘Can I call my mom’?” Her mom was driving in to work when she got the news. Flores-Mendoza recalls that her excited response was, “My daughter is going to go to the best private school in Minnesota. We started crying. Then she stopped and said: ‘So you are going, right?’ Then I knew I was going to come here.” She is now a junior with a triple major in communications studies, Spanish, and English with emphasis on professional writing. “Spanish was not originally going to be a major or minor, but I don’t want to lose a big part of my identity,” she said. “I came from an elementary school and high school that was full of minorities – people who look like me – to a classroom where sometimes I was the only one.” Her Spanish language skills and strong cultural identity helped her to be selected to appear in one of the first-ever Spanish language versions of St. Thomas’ “We Are Tommies” TV campaigns. “I wanted to do it because it was going to be on Univision – I grew up on Univision. My grandmother and I bonded over telenovelas.” She said learning about other cultures and multiculturalism and sharing her culture with others is important to her. She was in the multicultural club on campus, and in high school was a co-facilitator of the feminist club, a part of the gender sexual alliance, a changemaker fellow, involved in the sustainability club and at St. Thomas was in Undergraduate Student Government. She’s already starting to live out some of her dreams. On campus, she was a social media intern for the office of the VP of Student Affairs and is now a student worker with ITS, the Innovation and Technology Services department. “There are so many opportunities here,” she said. “I could’ve gone somewhere else, but honestly, at the end of the day I am happy I am here – I have been so blessed.”

She is Adalí Flores-Mendoza and she is proud to be a Tommie.
https://news.stthomas.edu/dease-scholar-maintains-culture-with-spanish-major/ Source: Sheree Curry, St. Thomas