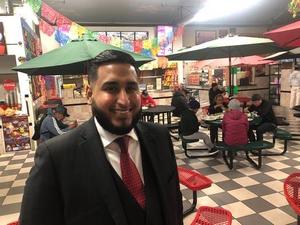 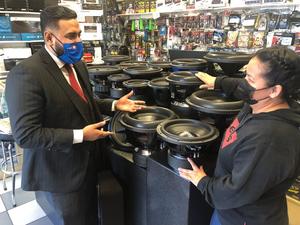 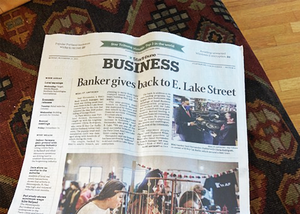 Graduate and BMO Lake Street Branch Manager, Saul Hernandez '13, was recently interviewed by the Star Tribune about the Cristo Rey Corporate Work Study Program that brought him to BMO, his financial literacy work in the community, and the role BMO has played in rebuilding Minneapolis’ Lake Street corridor after 2020’s civil unrest.
NOVEMBER 15, 2021
Saul Hernandez, a BMO Bank branch manager, last week was visiting small-business clients in the E. Lake Street corridor hurt by the riots that followed the May 2020 police killing of George Floyd.
At Plaza Mexico near Portland Avenue, Hernandez caught up with with his longtime customer Olivia Rodriguez, who owns El Rey Car Audio with her husband, Adrian Gutierrez. The popular retail-and-installation outfit was damaged along with hundreds of others during the riots.
The couple, backed by BMO's nearby branch, are planning to move from their cramped leased space to a larger building they will own nearby.
The nine-person BMO branch on Fourth Avenue was destroyed by rioters and then rebuilt by the Canadian financial services company. It's a busy place.
"We're seeing a significant increase in business," said Hernandez, who grew up off E. Lake. "We are one of the most successful branches in the Twin Cities. And I see Lake Street coming back."
Hernandez said his branch has been involved in "millions" in aid and credit to Lake Street enterprises.
Banker Saul Hernandez at Plaza Mexico near Portland Avenue and E. Lake Street
The bank, in addition to its own lending programs, has helped client businesses take advantage of Small Business Administration programs, and worked with the Lake Street Council and local government. Beyond lending, it also does financial counseling.
Hernandez, 26, points out that the branch employees are diverse and multilingual, a reflection of the community around it.
"He empowers people there," said Shaheena Khan, the regional president of BMO who hired Hernandez as branch manager last year. "When I think of BMO, and removing barriers to inclusion … Saul models that daily. And he's building our business with his team."
Hernandez moved in the 1990s from Mexico to Minneapolis with his brother and parents, following relatives in search of work.
The family lived in a cramped apartment off Lake Street. Hernandez's parents took whatever work they could find, including laboring in a glass-recycling plant and cleaning up construction sites. Hernandez and his older brother, Moises, attended nearby Cristo Rey Jesuit High School. Tuition for the mostly working-poor students of color is partly covered by businesses that hire students for internships.
Hernandez was a several-year intern at the BMO branch on E. Lake he now manages. He learned about making and managing money, saving and credit products and how to qualify for a mortgage. While there, he introduced his parents to the bank's financial literacy and credit-building programs.
His parents now own a home, thanks in part to a BMO first-time homeowner program.
"Saul comes from a proud family that always wants to do the right thing," Cristo Rey President Jeb Myers said. "Saul has an exuberance for helping people. Whether in economics class, or your finances, or what you should do on your date Friday night."
Hernandez volunteers at Cristo Rey, helping students understand personal finance and credit.
"I hope to show other kids that they can do anything they put their mind to," he said.
The Hernandez family also believes in accountability.
Saul's older brother dropped out of high school. His parents made him go to work at the glass-recycling plant and pay his share of the bills. Moises eventually returned to Cristo Rey and graduated with Saul's class.
The two attended St. Mary's University in Winona on significant scholarships. They also worked, majored in finance together and took the same courses, so they could share books. They shared one meal plan to further save money.
Saul was hired out of college by U.S. Bank in a corporate sales job. Moises is now a USB manager.
Saul Hernandez, who often works in tandem with community groups and minority-business associations, considers himself a financial educator.
BMO has a regulator-approved loan package for capital-light minority entrepreneurs that includes a line of credit of up to $50,000. That credit over the last year often was packaged with related grants and assistance from partners, such as Lake Street Council, the Small Business Administration and foundations invested in stabilizing Lake Street as an ethnic business corridor.
Those funds, some advanced while clients awaited insurance proceeds, have totaled millions over the last year, Hernandez said. The money and financial coaching is meant to help businesses like El Rey recover, become better financial managers, and grow profitably.
https://www.startribune.com/bank-manager-who-grew-up-off-lake-street-determined-to-help-neighborhood/600116697/ Source: NEAL ST. ANTHONY, STAR TRIBUNE