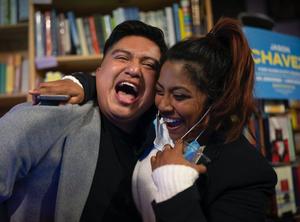 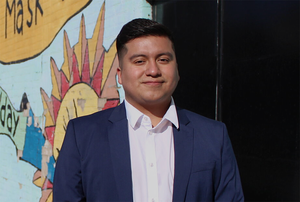 A Minneapolis first: Candidates of color win a majority of City Council seats
NOVEMBER 3, 2021
DFL-endorsed newcomer and Cristo Rey Jesuit graduate, Jason Chavez, received 56.89% of the vote in a field of seven challengers to replace outgoing Council Member Alondra Cano.
Chavez, 25, is a legislative aide for the Minnesota House of Representatives Workforce and Business Development Committee. He supported a new Department of Public Safety and the rent control measures on the ballot. Chavez said Tuesday he was "excited the Ninth Ward has been returned to the people." He said he would focus on reducing gun violence as well as police violence. Chavez said he is also passionate about the city providing affordable "housing for all."
When Jason Chavez was growing up in Minneapolis, there were times when 16 members of his family would cram into one house: “It was a beautiful time, all of us together,” said Chavez.
Even when his immediate family was without a home of their own, they could always count on an extended network to provide a basement where they could crash. “We were lucky to have that family and family support.”
That’s the story of his immigrant family from Mexico, he says, and it’s “the story of Ward 9, of our neighbors” — the people who he now wants to represent on the Minneapolis City Council.
The seat, which opened up after Council Member Alondra Cano decided not to see reelection this year, represents the neighborhoods Central, Corcoran, Midtown and East Phillips, Powderhorn and part of Longfellow, and has attracted a crowded field, with seven declared candidates so far.
Chavez, 25, who lives in the Central neighborhood and works as a legislative aid at the Minnesota House, said one priority is pushing the city to do more to help immigrants. Chavez supports the creation of a municipal ID, the kind that he says would prevent some deportations, if it could be done while protecting privacy. He also backs forming a fund that would cover certain fees for those in the Deferred Action for Childhood Arrivals program.
Chavez also cites public safety as a top priority. He backs retooling the city’s public safety approach to emphasize de-escalation methods, developing community response teams and expanding youth programming. Another benefit of creating a new public safety system is designing a more economically effective department, said Chavez, one that absorbs less of the city budget.
He also believes more of the budget should be set aside for economic development, particularly for small businesses like those on East Lake Street and in corridors along avenues like University and West Broadway. He backs efforts to implement rent control, as well as other tenant-minded policies like allowing tenants the right to purchase properties if they are being evicted for construction.
As a council member, Chavez said he wants to make city government more accessible, and would find ways to work to improve the way Minneapolis staff and representatives interact with residents — something that comes out of another early memory of living in Minneapolis, when city staff explained important information to his Spanish-speaking parents in English.
Sources:
https://www.jasonchavez.org/
https://www.startribune.com/a-minneapolis-first-candidates-of-color-won-a-majority-of-city-council-seats/600112821/
https://www.startribune.com/contenders-close-to-ousting-several-minneapolis-city-council-members-who-backed-replacing-police/600112159/
https://www.minnpost.com/metro/2021/03/meet-the-minneapolis-council-candidate-jason-chavez/
Print