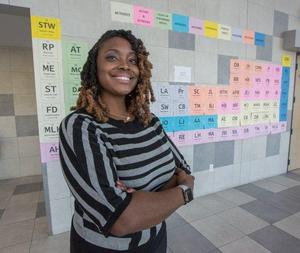 Cristo Rey Jesuit High School in south Minneapolis is the closest Catholic high school to where Floyd died, and it was vandalized in the rioting that followed. Principal Erin Healy said Chauvin’s trial, and the April 11 deadly police shooting in Brooklyn Center of another Black man, Daunte Wright, during a traffic stop, also was an emotional time for the school’s community: students, families, faculty and staff. “Our biggest focus has been how our students are feeling and processing,” she said.

“This has stretched us to consider what is most meaningful and impactful for students — how to listen, how to center students’ voices, how to be responsive when something so traumatic feels overwhelming,” Healy said. “The verdict may have been a moment of accountability,” she said, “but this is still a somber understanding of how much work is ahead of us where each human life is valued and seen as a child of God.”

Several courses incorporated reflection, writing or discussion time into the classroom, allowing students to discuss the issues with their teachers and classmates, Cass said. The DEI Committee also reached out to faculty with emotionally supportive messaging and instructional options for the classroom.
Among her responsibilities, Kia Burton serves as an alumni counselor at Cristo Rey and staff advisor for the school’s Black Student Union. In the months following the deaths of Floyd and Wright, Burton has led many efforts to support students and graduates during a challenging time.

“It’s been a journey of supporting our students, a learning opportunity, because these have been trying times over the last couple of years for many,” she said. “And being located where we are, we are definitely not immune to the widespread impact these tragic events have been having on our communities.”

In addition to various listening sessions, the school hosted a prayer service after the verdict came, and brought in spoken-word artists, Burton said.

“It was great because their art spoke of the heaviness of what people of color go through,” she said. “But it also motivated us to continue to ‘rise up.’”

Cristo Rey faculty and staff also offered resources to families of students who live in Brooklyn Center, where Daunte Wright was shot during a traffic stop. Days of unrest in the suburb followed the shooting, which made it difficult for some residents to leave their homes to visit a grocery store.
Burton recalled hearing from a Black faculty member about his fear of the possibility of not making it home to his family because of the color of his skin, and the fear of negative interactions with police — not because he is doing anything wrong, Burton said, but because of systemic racism and bias that some officers may have. He alerts his wife when he arrives at every destination.
“I’m a Black woman and this is our daily life,” she said.
https://thecatholicspirit.com/news/local-news/schools-help-students-talk-through-feelings-about-floyds-death-chauvin-trial/ Source: The Catholic Spirit