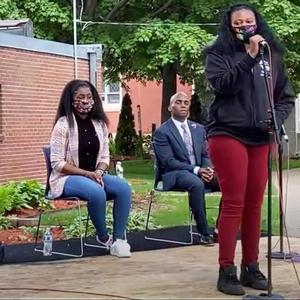 On March 25, Cristo Rey Board Member and Director of the University of St. Thomas' Racial Justice Initiative, Dr. Yohuru Williams, joined students Kadija and Diamond to pause and reflect on the year since George Floyd’s death. Watch the program to better understand the historical context of the continuing racial trauma in our community, and how we can engage and move forward with conviction and hope.
MARCH 25, 2021

One year after the murder of George Floyd at the hands of Minneapolis police, St. Thomas’ Racial Justice Initiative (RJI) assessed the community’s healing and progress toward change, highlighting the voices of three Black students.

The initiative, led by founding director Dr. Yohuru Williams, was launched last summer amid the civil unrest that followed Floyd’s murder to help drive meaningful change and reform through dialogue and critical conversations, among other means.

Kyros Cline-Cole, a St. Thomas junior, alongside two Cristo Rey Jesuit High School seniors, Diamond and Kadija, who will attend St. Thomas in the fall, shared their perspectives with the St. Thomas community on Tuesday in a conversation with Williams about the past year.

“When I first saw the video [of George Floyd’s killing], I broke down, I cried. I couldn’t stop crying. I stayed in my room the entire day. I was heartbroken. I really felt like I lost someone that I knew,” Diamond reflected. “A year later, we’re not where I feel like we should be.”

Diamond and Kadija co-founded the Black Student Union at Cristo Rey High School and said they’re inspired to be the generation that makes a change. Williams said healing starts with feeling. Young people are our community’s future leaders their perspectives are unique and important to amplify, he said.

“Listening allows us to be in a space where we recognize the wound as it cries out in others,” Williams said. “Our students did a wonderful job in demonstrating and communicating the myriad of ways that wound continues to impact students and communities of color not just in negative ways, but also how it drives their activism, their desire to make the world a better place for the next generation. Cline-Cole, a financial management major and GHR fellow tasked with changing the world through ethical business practices, told Williams that community engagement and activism is not for some, but all.

“When something happens to injure our community, such as the passing of George Floyd, we should all feel it. We should all be shaken by it and rush to find a solution,” Cline-Cole said. “Our pain as Black students doesn’t just go away after a traumatic event…it’s something that sticks with us for a while, if not forever.”

As civil unrest in the spring of 2020 laid bare the realities of systemic racism, President Julie Sullivan recruited Williams as the founding director of RJI to help guide St. Thomas to be part of the solution to dismantling racial disparities and employing strategies to heal racial divides. RJI focuses on racial justice education, facilitating research, exploring community partnerships and encouraging dialogue and critical conversations, Sullivan said. Learning from the students’ experiences, including ones from our partner high schools, is a part of that process to foster belonging and build community engagement.

“We remember the lives lost to racial violence and we pray for their families, friends and communities. We recommit to Catholic values of racial equity in this moment of challenge and believe in the hope that change can come when we act to embrace the dignity of all human lives,” Sullivan said on Tuesday.

While May 25 marks one tragic event, Williams said the conversation was much bigger than just what happened to George Floyd. He said the community is tasked with confronting racism and racial inequality in all of its forms and moving toward a model of community that truly values strength in diversity.

A call-to-action, Kadija said, motivates her work as an activist and poet.

“Our communities need to come together to make a change, somehow, some way because our younger ones are looking to us,” she said. “If we’re not doing it, who is?”

A desire and demand for something better, Williams added, is what we can see amid the trauma and pain of George Floyd’s murder; his death sparking a movement of 26 million people worldwide who took to the streets and voted with their feet.

https://news.stthomas.edu/healing-and-change-one-year-after-george-floyd/ Source: Healing and Change: One Year After George Floyd