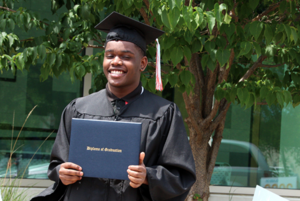 The school sustained a few broken windows from the protests after the death of George Floyd. Staff boarded them up in advance of the school’s drive-through graduation ceremony, held on June 6.

This private Catholic school, located right off Lake Street in Minneapolis (at 2924 4th Ave. S.) sustained a few broken windows from the protests after the death of George Floyd. Staff boarded them up in advance of the school’s drive-through graduation ceremony, held on June 6. Each graduate had instructions to pack family members into one vehicle, and to pull up to one of two stations, where they received a diploma cover and posed for two photos — one alone, and one with two family members.

Jennifer Agustin Ambrocio, 17, drove through the mini in-person graduation ceremony with her parents and three younger sisters. She says she was a bit nervous at first because she didn’t know what to expect. But seeing her teachers wave from the school’s rooftop and getting that in-person, formal recognition left her “feeling grateful.”

She plans to attend the College of Saint Benedict, on a full-ride scholarship, to study prelaw in the hopes of becoming an immigration lawyer.

Jaylen Cargill, 18, drove through with his mother and niece, with a few other immediate family members parking nearby and walking over to capture his official graduation photo op as well. He was pleasantly surprised by the event: “I thought it was going to be bland,” he said. “I didn’t expect all of this.”

He plans to attend Point Park University, in downtown Pittsburgh, this fall, on a basketball scholarship, to study electrical engineering.