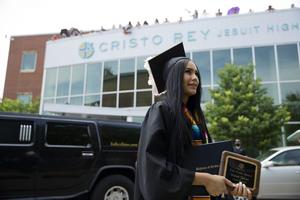 Despite pandemic and protests, Cristo Rey graduates get their moment in the sun.

Senior year did not turn out how the Cristo Rey Jesuit High School class of 2020 expected. As the coronavirus was declared a pandemic in March, students were told to pack their things and plan not to return to school. Then at the end of May, after Minneapolis police killed George Floyd, mass protests, fires, and vandalism rippled through the South Minneapolis neighborhood where many of them live. The school, located one block off of Lake Street, suffered four broken windows. Directly behind the school, an AutoZone store burned to the ground.

Still on Saturday, under a sunny June sky, the staff of Cristo Rey cheered from the rooftops as the graduating class drove through with their families, one at a time, to receive their diplomas.

“It’s easy to say that our students have been challenged, but at the same time it has really brought out the best in our students,” said Raquel Gudiel, the school’s director of college counseling. “It has really made them put in the work and put in the efforts to continue on and finish. Our students are really resilient.”

All 124 seniors were accepted to college, and many were first in their families to graduate. Eighty-six percent of the students are Hispanic or Latino.

Gudiel said she was proud that the school had still gone forward with an in-person graduation, while taking measures to protect against the coronavirus.

“Their moment was not taken away,” she said. “It gives a bit of respite in a moment that’s chaotic. I think it shows a lot of hope. These are our future doctors, lawyers, lawmakers, people who bring on change, so it means a lot to still have this today.”

Bedilia Mata-Centeno is the first in her family to graduate from high school. She’s headed to Macalester College to major in biology on a pre-med track. “As a first-generation Latina, I think it’s pretty proud and amazing to be here,” Bedilia said.

Bedilia, whose family is from Mexico, has loved the community at Cristo Rey. Every year the school holds a Unity in Diversity Day to showcase different cultures and traditions. It shows how people can learn across cultures and be united, Bedilia says. She hopes her brother, who’s now in seventh grade, will follow in her footsteps and graduate from Cristo Rey, too.

Bedilia lives three blocks from the Third Precinct police station, which was burned down in the George Floyd protests two weeks ago. Many other nearby buildings burned, too. “That was the community I had lived with all my life, and then seeing it burn down was something else,” Bedilia said. “It made me feel sad, but it showed that there is still injustice in the world and we need to fix that.”

Students emerged from their families’ cars, often decorated with balloons and stickers, one at a time in a cap and gown to receive a diploma.

For Baydan Dahir’s family, who came from Somalia, the graduation marked a big milestone and celebration. She’s the first in her family to go to a four-year university. She’s heading to Northwestern University to study psychology.

Baydan lives close to Lake Street in South Minneapolis. She’s been staying with family in Apple Valley to get away from the disturbances. But she’s encouraged by the protests.

“It’s been really nice to see that where I’ve grown up is kind of the home base for all this change,” Baydan said. “I never expected where I grew up to get on the news for such a special reason.” She’s hopeful that her community will become known for bringing an end to police brutality.

Some students and their families chose to adorn their caps with homemade messages, decorate cars with stickers, or even rent a Hummer limo to celebrate their graduates, giving the drive-through ceremony a parade-like feel. For many, it was the first time they had seen school staff or their classmates since the coronavirus shutdown began in March.

For Fredi Ponce, who is the first in his family to graduate from high school, Saturday was a major milestone. “It means a lot of years of struggling and hard work paying off, and dreams coming true,” he said. “It’s all paying off now.” Fredi will be attending St. John’s University in Collegeville. He plans to study nursing, and later get certified in anesthesia.

All students at Cristo Rey are placed in internships to help pay their tuition. Fredi’s internship in the corporate finance department of UnitedHealth Group was a highlight of his high school experience. “It was very surprising to me that a big company wanted a 14-year-old to work with them,” he said. “I was treated as a team member, not like a child. They actually included me in many things. It made me feel like part of the team.”

Though the protests of the past two weeks have been disruptive, Fredi views them as positive. “I’m happy it’s happening in our city,” he said. Though it was sad to see buildings burn, he said, “at the same time, I feel it was about time that someone pays attention to the problem.”

Fredi, who has spent his whole life in Minneapolis, is looking forward to going to a new city and meeting new people when he moves to Collegeville.

Staff wearing masks and disposable gloves handed diplomas to graduating seniors. To follow social distancing guidelines, students came one at a time and were split between two different diploma stations.

Diego Hernandez won the Spirit of Cristo Rey award for his leadership as captain of the soccer team and helping lead retreats for freshmen and sophomores.

It was a “big learning experience, how the world can change so quickly,” he said. “One week we’re in school, and the next week everything’s changing.”