A send-off with big expectations 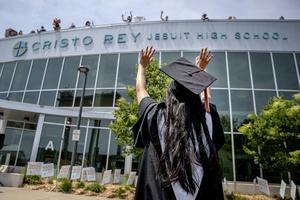 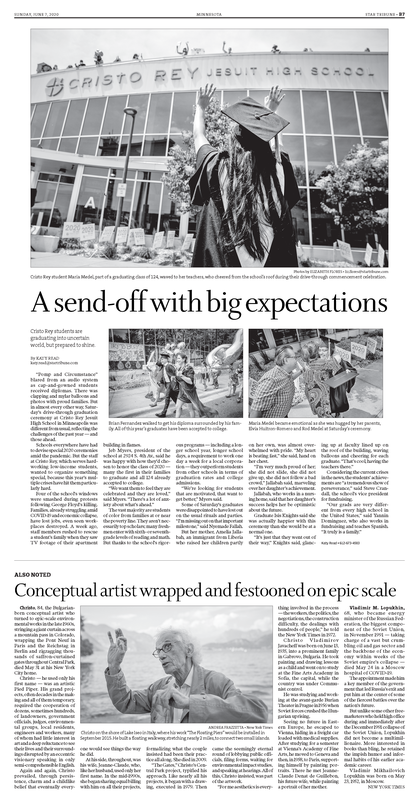 Cristo Rey students are graduating into uncertain world, but prepared to shine.

MINNEAPOLIS (StarTribune) — “Pomp and Circumstance” blared from an audio system as cap-and-gowned students received diplomas. There was clapping and mylar balloons and photos with proud families. But in almost every other way, Saturday’s drive-through graduation ceremony at Cristo Rey Jesuit High School in Minneapolis was different from usual, reflecting the challenges of the past year — and those ahead.

Schools everywhere have had to devise special 2020 ceremonies amid the pandemic. But the staff at Cristo Rey, which serves hardworking low-income students, wanted to organize something special, because this year’s multiple crises have hit them particularly hard.

Four of the school’s windows were smashed during protests following George Floyd’s killing. Families, already struggling amid COVID-19 and economic collapse, have lost jobs, even seen workplaces destroyed. A week ago, staff members rushed to rescue a student’s family when they saw TV footage of their apartment building in flames.

Jeb Myers, president of the school at 2924 S. 4th Av., said he was happy with how they’d chosen to honor the class of 2020 — many the first in their families to graduate and all 124 already accepted to college.

“We want them to feel they are celebrated and they are loved,” said Myers. “There’s a lot of anxiety about what’s ahead.”

The vast majority are students of color from families at or near the poverty line. They aren’t necessarily top scholars; many freshmen enter with sixth- or seventh-grade levels of reading and math. But thanks to the school’s rigorous programs — including a longer school year, longer school days, a requirement to work one day a week for a local corporation — they outperform students from other schools in terms of graduation rates and college admissions.

ELIZABETH FLORES • STAR TRIBUNE
Brian Fernandez walked to get his diploma surrounded by his family. All of this year’s graduates have been accepted to college.

“We’re looking for students that are motivated, that want to get better,” Myers said.

Some of Saturday’s graduates were disappointed to have lost out on the usual rituals and parties. “I’m missing out on that important milestone,” said Nyemade Fallah.

But her mother, Amelia Jallabah, an immigrant from Liberia who raised her children partly on her own, was almost overwhelmed with pride. “My heart is beating fast,” she said, hand on her chest.

“I’m very much proud of her; she did not slide, she did not give up, she did not follow a bad crowd,” Jallabah said, marveling over her daughter’s achievement.

Jallabah, who works in a nursing home, said that her daughter’s success help her be optimistic about the future.

Graduate Isis Knights said she was actually happier with this ceremony than she would be at a normal one.

“It’s just that they went out of their way,” Knights said, glancing up at faculty lined up on the roof of the building, waving balloons and cheering for each graduate. “That’s cool, having the teachers there.”

Considering the current crises in the news, the students’ achievements are “a tremendous show of perseverance,” said Steve Crandall, the school’s vice president for fundraising.

“Our grads are very different from every high school in the United States,” said Yannin Dominguez, who also works in fundraising and teaches Spanish. “It truly is a family.”